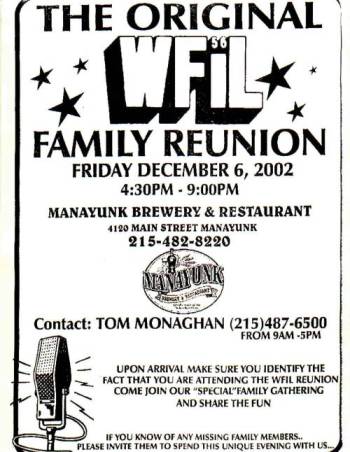 This was a night to remember, especially for me. The event was held on December 6, 2002, at the Manayunk Brewery Restaurant in Manayunk, Pa. Despite a early winter snowstorm that occurred on December 5th, over 100 people were able to attend. Below are a series of pictures of some of the former air talent, with "yours truly." Click on any for a full size image.

Long John Is Presented With An Award, From Wayne Cummings, A Former Student Of John's Broadcasting School

Myself Along With Former Program Director Jay Meyers

Mel Klawansky Presents Me With a Special Award For My Website

Former PD Dean Tyler, Who Is Now PD At WPEN In Phila.

Myself & WFIL Newsman Dave Madden, Who Now Works On KYW, In Phila.

In addition to those pictured, The following were also in attendance;

In addition Dick Clark, who was unable to attend sent a special audio message.